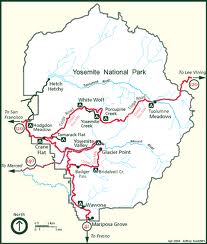 If you have never had the chance to visit Yosemite National Park and Mammoth Lakes you have missed some great scenery  BUT go in May or September.  June, July and August, the place is packed. Wall to Wall people.

We entered the Park from the East side.  That way you get to drive through some beautiful scenery with very few other cars on the road.  We also found some really nice obsidian deposits East of the park. Obsidian is a glass type of mineral found on the edges of lava flows. You Can collect samples if you are outside the park but no rock collecting in the park is allowed. Collect your samples after you leave the park so there is no question about you having them when you are in the park. The interesting part of  obsidian is that tools made from it have been found far to the East in New Mexico, Arizona and the Mid-West states indicating  that there was a trade culture established between West Coast Indians and those in the Mid-West. Got Dirt got us there.  We were able to explore some amazing back roads.
We figured if a road did not have a barrier across it , it was fair game.
No one stopped us so I guess the assumption was valid.  But, this was 10 years ago. Was this slice intended for Stone Soup or is it just a piece of really old cheese? The clouds started to literally roll down the mountain so we decided it was time to head back before we got wet.

This and Thats. Misc. Photo Albums