The African elephant is the largest living terrestrial animal. Its thickset body rests on stocky legs, and it has a concave back. Its large ears enable heat loss. Its upper lip and nose forms a trunk. The trunk acts as a fifth limb, a sound amplifier and an important method of touch. The African elephant’s trunk ends in two opposing lips. Males stand 10–13 ft tall at the shoulder and weigh 10,360–13,330 lb, while females stand 7–9 ft tall and weigh 4,762–7,125 lb.

The largest recorded individual stood 13 ft to the shoulders and weighed 22,000 lbs.

Elephants have four molars; each weighs 11 lb and measures about 12 in long. As the front pair wears down and drops out in pieces, the back pair shifts forward, and two new molars emerge in the back of the mouth. Elephants replace their teeth six times. At about 40 to 60 years of age, the elephant no longer has teeth and will likely die of starvation, a common cause of death.

Their tusks are firm teeth; the second set of incisors becomes the tusks. They are used for digging for roots and stripping the bark off trees for food, for fighting each other during mating season, and for defending themselves against predators. The tusks weigh from 51–99 lb and can be from 5–8 ft long. Unlike Asian elephants, both male and female African elephants have tusks. They are curved forward and continue to grow throughout the elephant’s lifetime.

There is no thrill like seeing a herd of wild elephants.  40-50 individuals spread out over the landscape.

These two were in a pushing match.  They went at it for as long as we stayed and watched.

Who says an elephant can’t run?  This guy was in a
hurry but for no apparent reason. 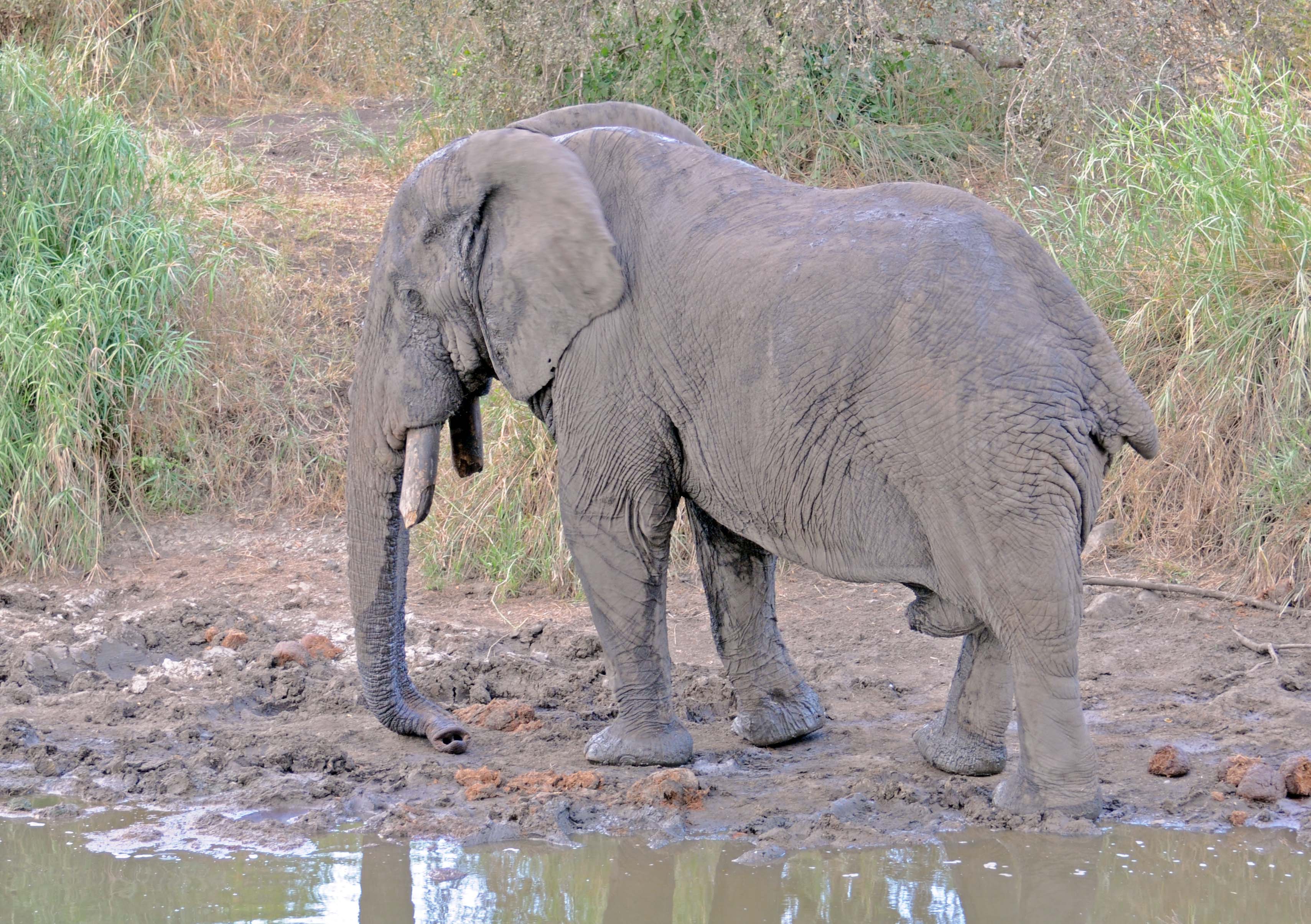 This is Duke.  Duke was the largest elephant in the Kruger National Park.  He has broken off both tusks digging up roots to eat.  He is getting up in years and probably has lost enough weight that he no longer qualifies as the biggest.  He is still the Big Daddy Elephant as far as the Kruger is concerned though.
Elephants go where they want.  Who is going to argue with something that big?

Yes, they really do go where they want!

And no, they do not stop for Stop Signs
They may be big. They may be slow BUT they are ahead of you, so live with it!
Here’s looking at ya!

The babies were really cute.  They loved to play in the water.  When the herd crossed the river, they were completely under water but they held their trunks up like snorkels to breath.  The adults kept them in the center and completely surrounded them with their bodies so that they would not float downriver and to keep the crocs from getting them.

So, how does an elephant drink?  They suck up water in their trunk and then curl it up and
squirt it into their mouth.  They may also squirt it at other elephants in play.
There was an amazing amount of interaction between elephants.  There is no doubt that
they possess an high amount of intelligence.