The Texas Skunk was actually a Nevada Skunk for six years before moving to Texas.  He lived in Las Vegas and belonged to back-roads exploring 4X4 club.  These are some of the pictures taken during that period.
My Nevada photos were lost in a major computer crash.  Most of these photos are from the collections of others who were my “Trail Buddies” in Nevada.
This is “Got Dirt”.  Our 2001 Jeep Sahara.  4.5″ lift, 33″ mud slinger
tires, front and rear lockers, Sway Bar disconnect, on-board air
compressor, full under armor and rock rails.  We carried 5 gal of
additional gas and a high lift jack.  Yes, it had AC!

Playing follow the leader out of a creek bed.
There were also places to get wet. And shady locations to have lunch such as this Aspen Grove

Joshua trees  are found in many locations through out Southern Nevada.

Bristlecone pines grow in isolated groves just below the tree line,
between 5,600 and 11,200 ft elevation .Because of cold temperatures,
dry soils, high winds, and short growing seasons, the trees grow very
slowly. Even the tree’s needles, which grow in bunches of five, can
remain on the tree for forty years, which gives the tree’s terminal
branches the unique appearance of a long bottle brush.
The wood is very dense and resinous, and thus resistant to invasion by insects, fungi,
and other potential pests. The tree’s longevity is due in part to the wood’s extreme durability.
This specimen was photographed in the Great Basin National Park in Nevada where cutting or
gathering wood is prohibited There are numerous Ghost Towns or in his case ghost cities.  They sprang up when a mining operation started and closed down just as fast when the mines closed.  Gold, Silver, copper, lead and many other minerals are present in Nevada.  Some mines have reopened and are now reprocessing the “tailing’s” waste piles.  One such mine is making expenses from the gold found and turning a nice profit with the copper that is reclaimed from the same pile.
This old trailer was probably home to a prospector and his family.
We found it at least 30 miles off any main road and on a road that
could only be navigated by a 4X4.  Have no idea how it got there.
There are many old homestead cabins scattered
around for exploring. Private property?  No,  67% of
Nevada is publicly owned by the US Government. Some residences were made from whatever materials were handy.
This bottle house is well known and is maintained to preserve
its character.  Legend has it that there was another such
house built but with the bottle necks facing out.  The owner
supposedly went crazy from listing to the wind whistle over
the exposed necks..  Blow across a bottle neck and you will
see what I mean. 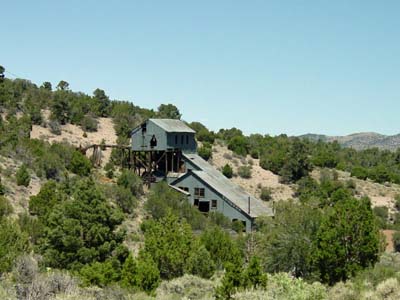 When mines close, most of the buildings and much of the equipment is abandoned in place.  Again leaving
great places to explore.

The official Government position is not to enter any mine.  Most are located on US Government property so officially mine exploring is a no no BUT when did that ever stop anyone?  You need to evaluate the mine by looking for large rock falls or evidence that the ceiling has collapsed in places. If you find that, stay out.  But if the ceiling is okay and there is no evidence of any large rock falls inside, you are probably relatively safe in sticking your nose in. These two are no-goes.  One is not well constructed from the start
and the other shows evidence of a major collapse.
This one is dug between two faults and shows only evidence of minor gravel fall.  We explored it with no problems These are photos of the interior of some mines.
There are also many open pit mines.  You have to be careful walking
around that you don’t step on a piece of wood
and have it collapse under you into a 50-100 ft deep pit. It that
happens Early in the morning it will ruin your whole day!

Is this one okay to enter?  Yes, probably as the fall is from the
surface of the hill above it.  The mine shaft itself looks sturdy.

Remnant of a cabin fireplace?  No, its a charcoal kiln.  When wood is burned with a lack of oxygen, it turns into charcoal.  Yup, the same stuff you bar-b-que over.  So, were the miners BBQ fanatics?  No, charcoal , when burning and fed by a large amount of air burns very hot, hot enough to melt gold, silver, copper, etc.  It was used in the mining process In fact, some made their fortune, not by mining,
but by producing charcoal on a large scale Hum, we have a snake skin from a rather large snake.
That means its previous owned must be somewhere in the neighborhood There are many Indian Pictographs in Nevada. Surprisingly few have been vandalized so they are in good shape.  Some are merely chipped into the desert varnish, a patina that discolors rocks over a long period of time that covers most desert rock, however some are deeply engraved into the rock itself.